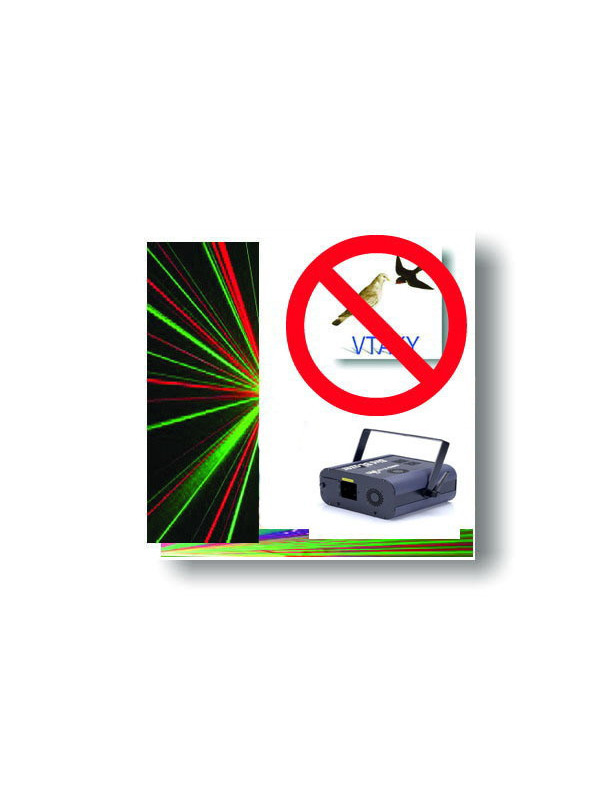 Modified disco laser for scaring birds, which has been modified by software so that it accidentally and unforeseen blinds the birds around you. Also suitable for scaring game.

For the ultrasonic scarecrow in industrial halls or under roof coverings, we recommend our modified "spread laser cannon, which blinds birds if they are accidentally deaf. It is known that some birds, especially pigeons, are either blind or deaf, so it is advisable to use a double scare. most effective.

Flocks of birds, pigeons or ravens that have settled in your area complicate life, not only for you or the inhabitants of the adjacent streets, we also recommend ultrasound powerful scarecrows. Many times the destruction of nests did not work on the birds. Therefore, also consider using a laser scarecrow.

Well, it's practically just a slightly modified disco laser, where it has been modified by software so that it accidentally and unforeseen blinds the birds around you. The device has also proved its worth for night outdoor scaring, but the device itself must be placed inside the building. Night irradiation prevents settling and the formation of nests. During the day, of course, the efficiency of the laser decreases rapidly. Of course, I do not prefer only my laser scarers, it is advisable to try any more powerful laser with an oscillating motion.

Beware the field raven is a protected animal.

Protect your eyes from looking directly into the laser!

Category III laser - in continuous mode they emit radiation in the visible region of the spectrum, the power of which does not exceed 5mW, and in pulsed mode a beam with a power of less than 0.5W. Diffuse reflection of radiation does not cause damage to health.

Leave the switches in the position they were in when purchased. But if you are trying to try different laser settings, i. various imaging patterns, whether the laser responding to sound is up to you. The device is also suitable for continuous operation, but it may heat up, so it is advisable to occasionally clean part of the fan in a dusty environment. Or we recommend connecting the device to a timer, it is quite sufficient if the device will be in operation during the winter period 05.00-09.00 and 17.00-21.00 and in the summer time 03.00-06.00 and 20.00-22.00.

The device is also suitable to combine with ultrasonic (inaudible for the human ear, but a little less learned) or NF scarecrow (audible, it emits various sounds of birds of prey and others ...)

Protectors: The laser is effective

He explained to us from the State Nature Conservation that laser scarves are effective. Scaring crows and ravens is done at night using light effects. Birds that try to settle in the nest are interrupted by laser light rays. "When they are scared, they will not return to the nest that night. This cycle is repeated for several days in a row until they find another nest elsewhere," the conservationist explained.

He added that laser scaring must take place at a time when ravens are beginning to build their nests and not when they are already definitively nested. The city should therefore use the raven scarer by mid-March. After this date, scaring of nested ravens is forbidden.

Help yourself cheaper: Such a scarecrow can also be an interesting and nice addition to the field. It has its own style. So one pin inserted and another in the cross. Classic. But! That is not all. Try to create a structure with small pieces of iron and thin sheet metal so that in the wind they create a sound. It doesn't even have to be too strong, the main thing is that the birds recognize a different sound from the rustling of the leaves and the singing of other birds and they are afraid of that. Plastic bags and old plastic packaging from cassettes and the like all make it sound in the wind.

Catalog for this year: http://www.plasice.sk/images/katalog-2014.pdf