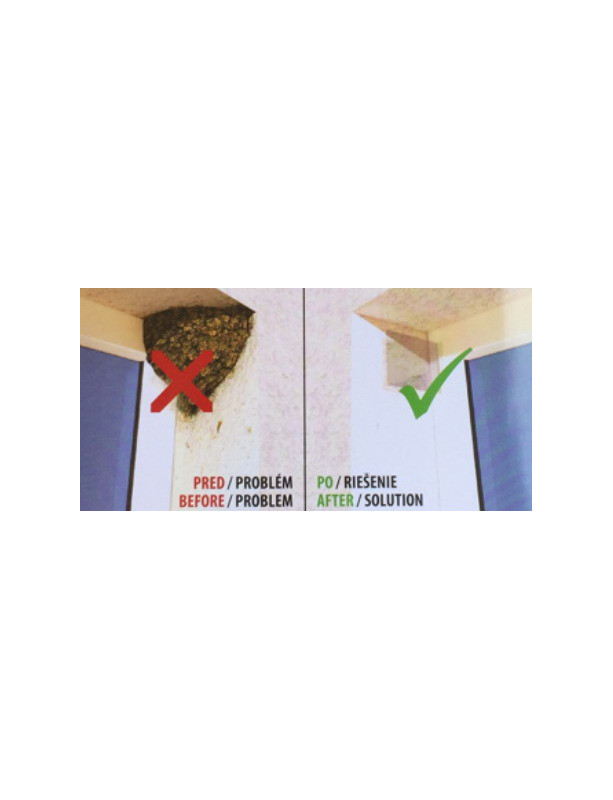 Mechanical protection of windows, window frames and facades, before construction

Mechanical protection of windows, window frames and facades, from the construction of nests by moving birds.

The product also has the protective function of the moving birds. The swallow is protected by law and, if the nest is arbitrary, the offender is threatened with prosecution. If you want to protect your property from the overthrow of the moving birds, but at the same time you want to protect the birds themselves, by sticking the product to the window frame to prevent the formation.

Mechanical protection of windows, window frames and facades, from the construction of nests by moving birds.

This product primarily has a protective function of the window and façade, especially on the nests of swallows.

Last but not least, the product has the protective function of the moving birds.

A person who wants to protect his property from the overthrow of moving birds, but at the same time wants to protect the birds themselves, by sticking the product on the window frame to prevent the formation of bird nests.

This not only avoids damage to the property, but also that the bird's nests already built (often with raised birds' eggs) are thrown away.

Wash the outer frame of the window.

Remove the foil from the pack and bend along the red strip to the right angle.

Peel the red strip out of the foil.

CAUTION: Glue the foil from the outside temperature of +13°C to make the adhesive on the foil effective throughout the year!

The product also has the protective function of the moving birds. The swallow is protected by law and, if the nest is arbitrary, the offender is threatened with prosecution. If you want to protect your property from the overthrow of the moving birds, but at the same time you want to protect the birds themselves, by sticking the product to the window frame to prevent the formation of bird nests. This will not only avoid property damage, but also the crashing of already built bird's nests (often already with raised bird eggs), as if the nest is already late in most cases – the window or façade is degraded and its original state is more costly than the product that can be used as a prevention.

Mechanical protection of windows, window frames and facades, before the construction of nests by the bird.

There are 4 pieces in the package – use on two windows.

July is the breeding season of swallows that have their dwellings near human houses. Many residents complain of the presence of bedbugs when swallowing nests reach homes. However, the unsatisfied people can be prosecuted if they arbitrarily remove the nest. Swallows are protected by law.

Nests of swallows have become a natural part of our apartments and houses. Some bird lovers who have their nests at the windows of their homes have registered bedbugs around them. They get into the rooms.

Therefore, they are considering removing nests. However, they may conflict with the law.

"Swallows have been building their abodes by our window for years. Only now have I noticed that a number of bedbugs are moving around the nests, which seem to carry swallows. They're crawling in through the windowsill slabs, and the whole family's scared of it.

In Slovakia, there are three similar species - swallow home, white house and brown bank. Swallow tolerates 4 to 6 eggs. The cubs are out of the nest after just three weeks. They are useful because in a day they eat as many insects as they weigh.

Many have no idea that they are protected by law and the destruction of their nests is an illegal activity. The culprit can be prosecuted.

The protected animal also protects the nesting habitat, according to Milan Barlog of the NP News.

"People cannot arbitrarily remove nests. It's criminal. Right now there is a nesting season that will last roughly until the second half of summer. I recommend that residents contact the competent nature protection authority in case of dissatisfaction with the dwellings of swallows at the windows of their houses. They will avoid possible inconveniences," the conservationist warned.

The social value of the swallows of the home is 230 euros, for white and shore, it is double.

'In the event of considering the abolition of swallow nests, it is necessary to request an exemption from prohibited activities by the Ministry of the Environment. If it does not, the culprit risks violating the law, which is usually dealt with with by a sanction,"

The supporters of swallows don't have to despair. The removal of the nest after the departure of the pups can be solved by replacement accommodation, for example, in the form of boxes. Adaptable swallows get used to quickly. However, something moving and shimmering, such as a cut foil or CD carrier, needs to be attached to the original location.

Bedbugs belonging to the arthropod strain are the most numerous in the world.

"Their incidence has increased significantly in recent years not only in households, but due to overall climate change also in the wild souring of our geographical zone. The most common form of damage to a person's health by foreign arthropods is direct sucking of blood. In households, parasitic insects causing human health problems are mainly represented by bedbugs, fleas, swells and a mosquito can multiply in flooded cellar areas of houses. Occasionally, bugs, pigeons and bat bugs can also parasitise on humans," she said.

One of the species of bedbugs lives in the nests of swallows, from where it easily gets into apartments. "Getting rid of bedbugs is challenging. Unlike other insects, no biocidal preparations of the nature of the pitfalls have been developed so far. The easiest way to prevent the appearance of puns swallows and probably the only preventive is to prevent swallows from building nests in places from which parasitizing bedbugs can easily get into apartments.

Bedbugs in our climatic conditions as vectors of infectious diseases are of no importance and, according to recent research, do not pose a danger in terms of the spread of communicable diseases in humans or in hepatitis B, C or HIV. Source: sme.sk